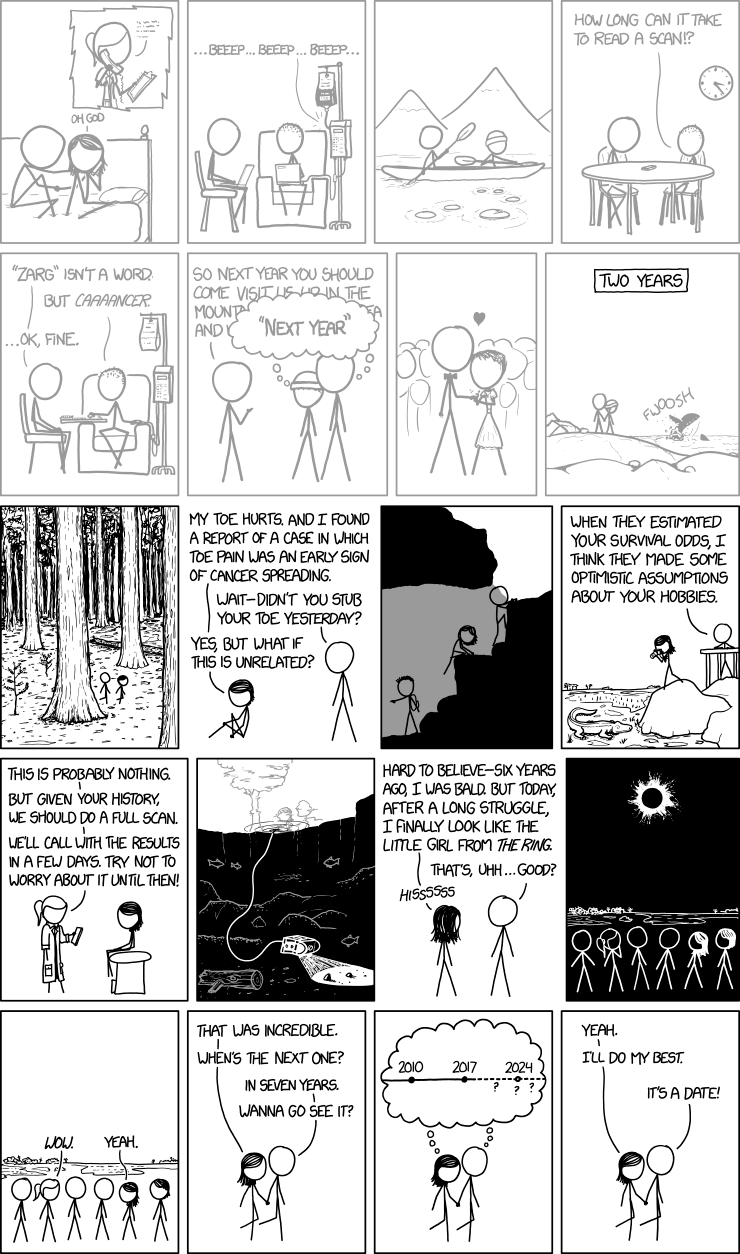 rjstegbauer
reply
Touching and beautiful! One of your best.

louloupix
reply
That's why I still watch it..Time to time they deliver...

deezil
For those that don't know the whole story: Approximately 7 years ago (imagine that) Randall posted this on the blog https://blog.xkcd.com/2010/11/05/submarines/ and made some vague references to tough times in the comics. On in to 2011, he posted this on the blog, and things seemed to be scary but hopeful. https://blog.xkcd.com/2011/06/30/family-illness/ . He's made mention several times about it over the years inside the comics, and I really believe that "Time" was made for some express purpose as to get his emotions out. But this update seriously is making a grown 32 year old man weep openly at his desk (thankfully I have a door that closes), as I always wondered how things were. Things look good, and this makes my heart happy.

jlvanderzwan
Had the same with the previous comic, that this one references. I felt so much relief when I reached the end of this one...

jlvanderzwan
And this one explains how the experience of dealing with cancer "works": https://xkcd.com/931/

gordol
As someone who is now officially a cancer survivor, this one hits home.

Hmm. This was interesting up until it got into the evo-psych explanation at the end. Yes, we probably did evolve to dismiss ideas that threaten our core beliefs. But like almost any pattern of thought, it is both a consistent bias and a reasonable thing to do most of the time.

Why are these responses rational? First, because conversation, books, articles, and speeches are all very weak evidence. I've got a mountain of experience behind me informing my beliefs. And somebody has just added a metaphorical pebble. Occasionally, it might cause a landslide resulting in a profound change in my understanding of the world. But most of the time it does not. If somebody changes their mind every time they hear an assertion, we tend to think of them as foolish and credulous. And for good reason.

I have heard assertions throughout my life. Some of them were true and many of them were false. I have to evaluate this assertion to get a sense of how probable it is.

Second, There is no fundamental way for me to perceive whether an assertion is true or false just by looking at it. Instead, I have to make a judgement based on the my previous beliefs and experiences (also known as pre-existing biases) and how much I trust the person making the assertion (also known as accepting an argument from authority). In a formal logic sense, both of these are clearly fallacies. But they are all I have to go on. So I have to use these tools to make sense of the assertion. If the assertion fits comfortably in the house of my core beliefs and I have a certain amount of trust in the asserter, then I might be willing to accept it. Otherwise, I will be likely to reject it.

Now let's say that somebody said something that sounds absurd. 'Absurd' is just another name for something that doesn't fit my core beliefs. In that case, I would likely reject it out of hand. And I would also feel threatened. I would likely downgrade the source. I might even become angry because a common cause of false assertions is that somebody is trying to trick me. Maybe they want me to look foolish or they want to defraud me.

Now the difficulty is that these reactions are reasonable whether or not my core beliefs are true. So if I come to have a core set of beliefs that happens to be incorrect (which is almost certainly true to some extent or another), then this rule of thumb can prevent me from replacing them with better core beliefs that are more true.

I think that the answer has to be somewhere in the middle. We should not be changing our beliefs every time we hear a countervailing assertion. But it is also important to seek out different perspectives on those beliefs. If there are no fresh inlets, our core beliefs will be stagnant intellectual swamps. But if we accept new assertions too readily, then we become a river with each new idea passing through and then replaced by the next and we have no possibility of retaining truth.

And it is important to use this kind of thought process as a form of self-improvement rather than as an argumentative bludgeon. It is far too easy to read about some fallacy or bias and then use it as a reason to find your opponent 'irrational' rather than using it as a tool for yourself. 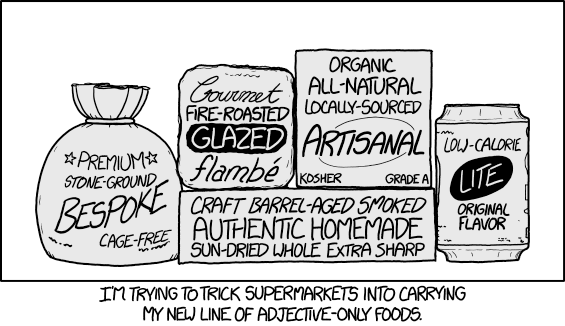 Covarr
reply
The juice-like drink industry already has this down. "I'm going to the store, need anything?" "Yeah, buy me a gallon of purple"
Moses Lake, WA

When young people arrive at college they are encouraged to keep this focus on themselves by student groups, faculty members and also administrators whose full-time job is to deal with — and heighten the significance of — “diversity issues.” Fox News and other conservative media outlets make great sport of mocking the “campus craziness” that surrounds such issues, and more often than not they are right to. Which only plays into the hands of populist demagogues who want to delegitimize learning in the eyes of those who have never set foot on a campus. How to explain to the average voter the supposed moral urgency of giving college students the right to choose the designated gender pronouns to be used when addressing them? How not to laugh along with those voters at the story of a University of Michigan prankster who wrote in “His Majesty”?

This campus-diversity consciousness has over the years filtered into the liberal media, and not subtly. Affirmative action for women and minorities at America’s newspapers and broadcasters has been an extraordinary social achievement — and has even changed, quite literally, the face of right-wing media, as journalists like Megyn Kelly and Laura Ingraham have gained prominence. But it also appears to have encouraged the assumption, especially among younger journalists and editors, that simply by focusing on identity they have done their jobs.

Recently I performed a little experiment during a sabbatical in France: For a full year I read only European publications, not American ones. My thought was to try seeing the world as European readers did. But it was far more instructive to return home and realize how the lens of identity has transformed American reporting in recent years. How often, for example, the laziest story in American journalism — about the “first X to do Y” — is told and retold. Fascination with the identity drama has even affected foreign reporting, which is in distressingly short supply. However interesting it may be to read, say, about the fate of transgender people in Egypt, it contributes nothing to educating Americans about the powerful political and religious currents that will determine Egypt’s future, and indirectly, our own. No major news outlet in Europe would think of adopting such a focus.

But it is at the level of electoral politics that identity liberalism has failed most spectacularly, as we have just seen. National politics in healthy periods is not about “difference,” it is about commonality. And it will be dominated by whoever best captures Americans’ imaginations about our shared destiny. Ronald Reagan did that very skillfully, whatever one may think of his vision. So did Bill Clinton, who took a page from Reagan’s playbook. He seized the Democratic Party away from its identity-conscious wing, concentrated his energies on domestic programs that would benefit everyone (like national health insurance) and defined America’s role in the post-1989 world. By remaining in office for two terms, he was then able to accomplish much for different groups in the Democratic coalition. Identity politics, by contrast, is largely expressive, not persuasive. Which is why it never wins elections — but can lose them.

The media’s newfound, almost anthropological, interest in the angry white male reveals as much about the state of our liberalism as it does about this much maligned, and previously ignored, figure. A convenient liberal interpretation of the recent presidential election would have it that Mr. Trump won in large part because he managed to transform economic disadvantage into racial rage — the “whitelash” thesis. This is convenient because it sanctions a conviction of moral superiority and allows liberals to ignore what those voters said were their overriding concerns. It also encourages the fantasy that the Republican right is doomed to demographic extinction in the long run — which means liberals have only to wait for the country to fall into their laps. The surprisingly high percentage of the Latino vote that went to Mr. Trump should remind us that the longer ethnic groups are here in this country, the more politically diverse they become.

Finally, the whitelash thesis is convenient because it absolves liberals of not recognizing how their own obsession with diversity has encouraged white, rural, religious Americans to think of themselves as a disadvantaged group whose identity is being threatened or ignored. Such people are not actually reacting against the reality of our diverse America (they tend, after all, to live in homogeneous areas of the country). But they are reacting against the omnipresent rhetoric of identity, which is what they mean by “political correctness.” Liberals should bear in mind that the first identity movement in American politics was the Ku Klux Klan, which still exists. Those who play the identity game should be prepared to lose it.

We need a post-identity liberalism, and it should draw from the past successes of pre-identity liberalism. Such a liberalism would concentrate on widening its base by appealing to Americans as Americans and emphasizing the issues that affect a vast majority of them. It would speak to the nation as a nation of citizens who are in this together and must help one another. As for narrower issues that are highly charged symbolically and can drive potential allies away, especially those touching on sexuality and religion, such a liberalism would work quietly, sensitively and with a proper sense of scale. (To paraphrase Bernie Sanders, America is sick and tired of hearing about liberals’ damn bathrooms.)

Teachers committed to such a liberalism would refocus attention on their main political responsibility in a democracy: to form committed citizens aware of their system of government and the major forces and events in our history. A post-identity liberalism would also emphasize that democracy is not only about rights; it also confers duties on its citizens, such as the duties to keep informed and vote. A post-identity liberal press would begin educating itself about parts of the country that have been ignored, and about what matters there, especially religion. And it would take seriously its responsibility to educate Americans about the major forces shaping world politics, especially their historical dimension.

Some years ago I was invited to a union convention in Florida to speak on a panel about Franklin D. Roosevelt’s famous Four Freedoms speech of 1941. The hall was full of representatives from local chapters — men, women, blacks, whites, Latinos. We began by singing the national anthem, and then sat down to listen to a recording of Roosevelt’s speech. As I looked out into the crowd, and saw the array of different faces, I was struck by how focused they were on what they shared. And listening to Roosevelt’s stirring voice as he invoked the freedom of speech, the freedom of worship, the freedom from want and the freedom from fear — freedoms that Roosevelt demanded for “everyone in the world” — I was reminded of what the real foundations of modern American liberalism are.